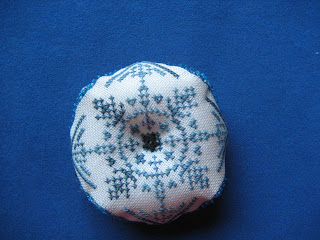 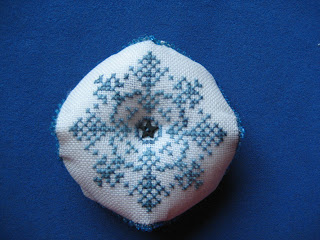 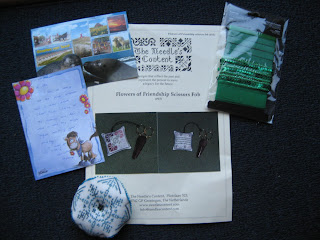 Today I received my biscornu from Mylene. She stitched it up in my favorite color -Blue. She also sent along a pattern from my wishlist--gotta love the wishlist!! The pattern is Flowers of Friendship Scissors Fob from The Needles Content. Also included was some ribbon, which is great for all those finishes. Thank you so much Mylene.

I had another stitching weekend with Jill. My hubby was gone fishing and we stitched all weekend!! Can't seem to get in enough stitching.

Conclusion of the Olympic Retreat


Ok, I am trying something new. I am doing a slide show of our Olympic Stitching Retreat. I will do my best in explaining the pictures. Hopefully a slide show will make it a bit easier to view all of our pictures.

The first one is of Jill feeling very Olympic with the new lighted necklace, that she made into a very fashionable head dress.

Then the next few pictures are of the goody bags. The first set of bags are from Jackie, she had patriotic bags with our names on them. The first goody bag is from is from Jackie, followed by Lori's mesh bag with a flag fob stitched with our first initial, and other goodies, then Jill gave us a bag with a floss tag that she stitched for each of us and red, white and blue socks her mom knitted for us and some other goodies. My goodies were all in a small trash can with a patriotic pillow case, and an ort bag and matching pin cushion I sewed. We also received some very nice goodies from Cathy, she made a special trip to the LNS--which isn't so local and got us a very cute snowman ornament kit, a planning calender for next year and some yummy candy. This was her first retreat with us, she didn't know what she was in for!!

The picture of Jill, I and the cat--the only ones who stitched all four days.

Then there was the lighting of the torch, which Jackie brought. Three of the Olympians carried the lit torch. The Olympians were Jackie, myself and Jill. Oh, stitchin' Sam also had a chance to carry the torch!! You can see Jackie sitting in her nest and intensely stitching.

The last pictures was taken after everyone left and Captain Underpants could finally relax and recoup from all of the festivities. All in all we had a great retreat. I can't wait until next year.

I believe that Jill and I took home the gold, followed by silver for Jackie and Lori and not to be forgotten was Cathy who took home the bronze for the two evenings she got to spend with us. Hopefully next year she will be spending more time with us.

I hope I captured most of the highlights of what we did. There of course was much more, but I don't know how much more anyone can take. I will have to have a post and show what I stitched. I haven't taken those pictures yet. So you will have to endure one more Olympic post I guess.

Our theme for next year is Snowmen. 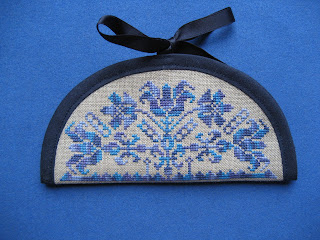 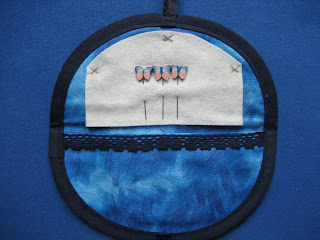 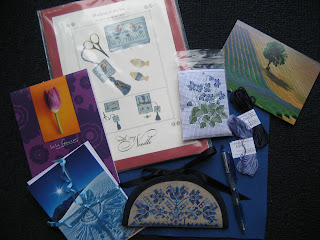 I received my Summer Quaker exchange from Brigitte. She stitched me a wonderful needle pocket in my favorite color - blue. It is exquisitely stitched and finished. And when I opened it up there were some really cute marking butterfly pins and two skeins of Vicki Clayton silks. Plus she sent me a pattern from my wishlist, Maidens of the Sea by With my Needle. Also included were some note cards, writing paper, a small kit and a pen. It was a great exchange. Thank you Brigitte. 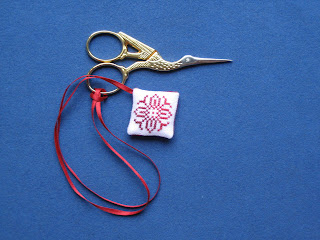 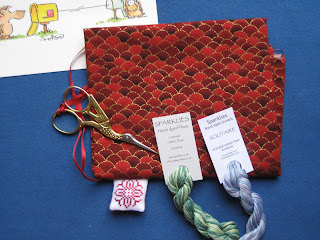 I also received my Redwork exchange in the same week. Paula stitched a fob and also sent some fabric for finishing, and two skeins of hand dyed threads from Sparklies. I can't wait to use them. Thank you Paula. 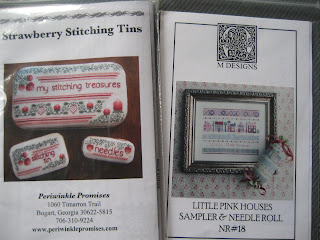 I also wanted to mention that I received these two patterns from Hazel who stitch my Summer House exchange which I posted earlier. She has ordered these patterns from off my wish list and they didn't arrived in time for her to send them in the exchange. So she was gracious enough to send them separately. Thank you Hazel.

I apologize for posting these exchanges so late, but between having my daughter, son-in-law and grandson here, plus getting ready for the stitching Olympic retreat I just haven't had alot of blogging time.

Stay tuned for the final Olympic update to be posted soon.

Posted by Mama Joan at 8:45 AM 2 Squad Stitchers

Just a very quick update. I have been to busy stitching to be blogging.

I need to keep stitching if I am going to win any of the stitching competitions!!!

The other two Olympians arrived yesterday and we had the official lighting of the torch. Then there has been some very fierce qualifying stitching rounds. There will be some semi finals tonight as we will be losing two stitcher's tonight and it will be down to the two original stitcher's. Although we will be joined tonight by a replacement stitcher who has not been able to stitch the whole 4 days with us. She did stop by for a little while on Wednesday for a warm up.

Hopefully I will have to whole run down and recap tomorrow. 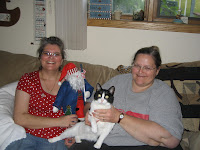 Here are the hardcore stitcher's with the mascot Stitching Sam and Captain Underpants. (Also known as Timebomb) 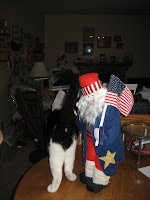 Here is why he is called Captain Underpants. Do you see his black underpants? 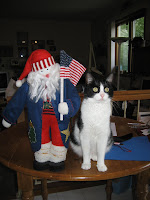 Captain Underpants is feeling rather Olympic!!!! He would like to join Stewey for some Olympic activities!! For those of you who don't know Stewey, belongs to the Spinster Stitcher. I sure hope she doesn't mind me mentioning her in my blog, but we have come to love her postings and look forward to her updates. 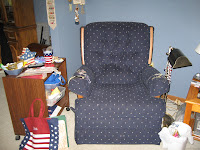 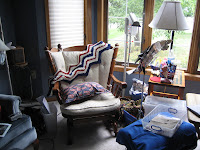 These two chairs are our comfy stitchy chairs. I stole that phrase from The Spinster Stitcher. We have our "nests" built for the duration of our Patriotic Retreat. The blue chair belongs to me and the white chair with the lovely red, white and blue sash is Jill's chair. She has the honor of wearing the sash for completing her first stitching project of the day. 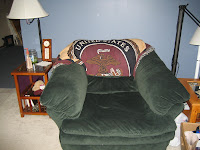 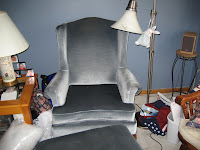 These two chairs were empty today. Tomorrow the other two members of the stitching team will be here to compete in various stitching and snacking categories. The trials should be over by tomorrow night with the finals to follow on Friday and Saturday.

Grandson in the house and A Very Olympic Retreat 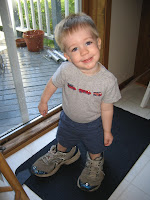 Before I tell you about the start of our Olympic Retreat I need to mention why it has been awhile since I have blogged. It is the picture above. My daughter and grandson Jacob were here from Tennessee for a week and a half and this grandma hasn't had an 18 month old running around this house for sometime. Our youngest is 20!!!!! So grandma and grandpa spent sometime with Jacob, and tried to keep the house safe!!!

Now we started our retreat yesterday after work by making a trip to our LNS. It was Jill, Lori, Jackie, Chris and myself. The first picture is of Lori, Jill, Jackie and myself. The second one has our party crasher Chris in it. She is going to the Needlework Guild of Minnesota retreat, but needed to go to the LNS with us. Because a retreat is not a retreat without a stop there. 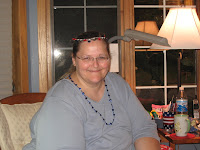 Once we returned home, we had to have some sustenance, which was pizza from a great little pizza pick up place called Savoy's. Then we all gave out our goody bags, which included alot of patriotic things as that was the theme of this retreat since it was an election and Olympic year. As you can see Jill got right into the spirit with here lovely necklaces. The one on her head is LIGHTED and makes a very nice crown, don't you think? 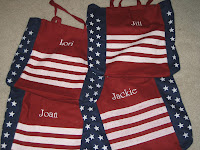 Look at these great bags Jackie gave us. Our own personalize patriotic bag. 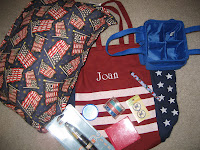 This was Jackie's gift bag filled with goodies. A patriotic pillow, a small tote, a pen, small notebook, ort tin, ribbon, Debbie Mumm buttons and a handy dandy 12 in one sewing multi tool!! 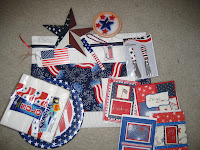 Lori gave us a vinyl mesh bag filled with a star tin ornament, a pen, candle, patriotic plates and napkins, notecards made by her mom, a personalize patriotic fob, and a bowl of candy. Which is not pictured here. 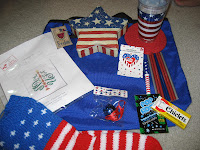 Jill gave us a bag filled with a pattern, which was kitted up. A star tin with some candy, a stitched floss tag, a pen and some pencils, knitted socks that her mom made, a patriotic bell necklace, patriotic pin and a patriotic cup and red coaster. 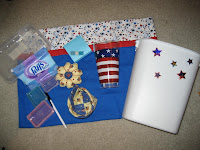 My gift "bag" was really a small trash can filled with a pillow case, patriotic pin cushion and ort bag that I sewed, some small plastic containers, a pen, post-it notes and puffs. 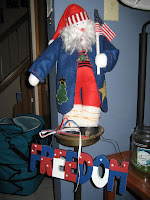 And I almost forgot. This is our mascot.
Stitchin Sam with our FREEDOM sign.

So there is just a little of what is going on. I have
some stitching to post, but I will have to do that later.

Until the next installment of Olympic stitching,
Happy Stitching.