Last Saturday I received the latest Ladies Prim Soceity kit which is a Blackbird Design.
The pattern is called Noel and is made into a stocking.
I just finished putting in the last stitches.
This will be my last finished stitched piece for 2014. 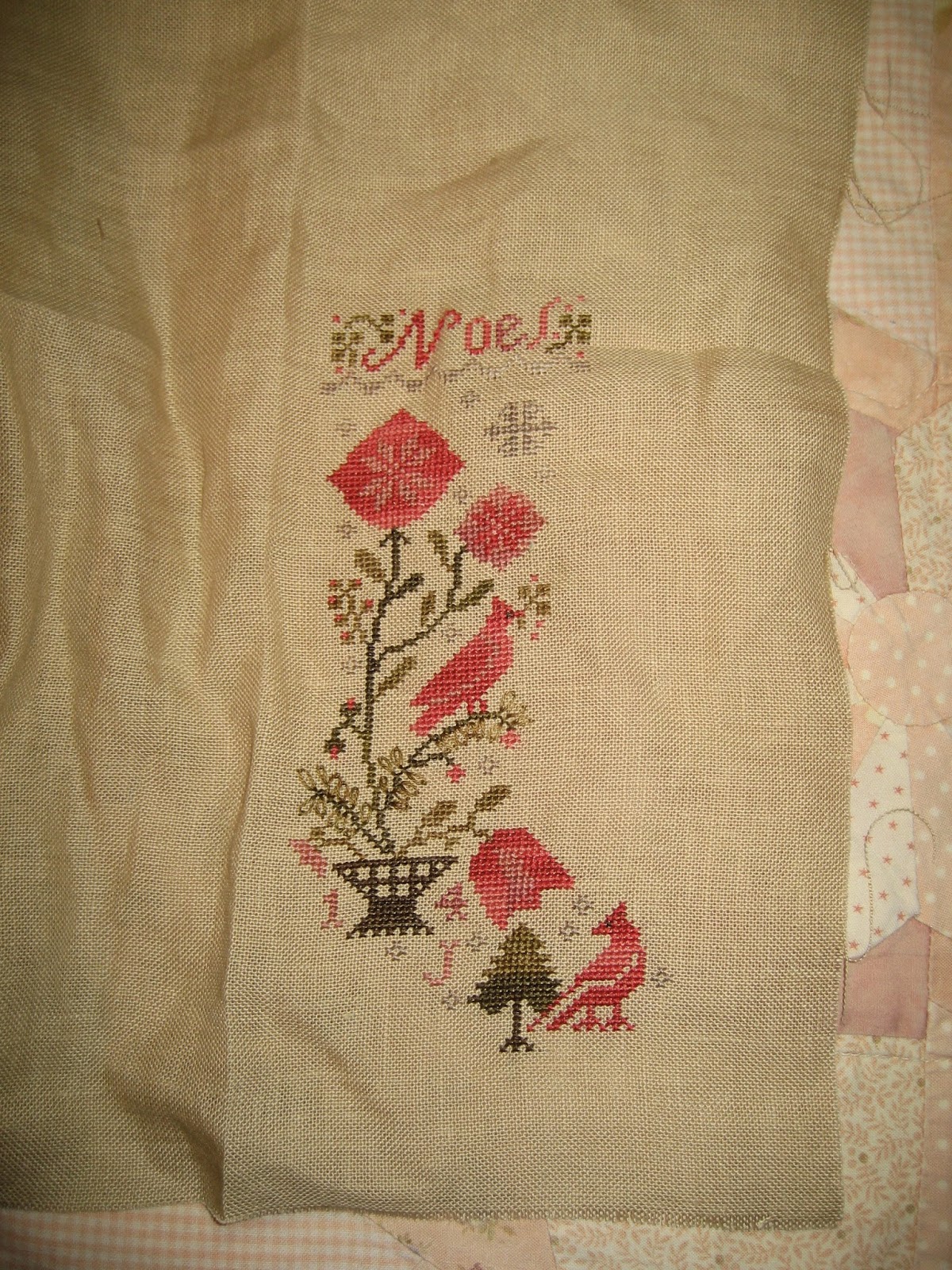 I stitched a total of 57 pieces this year.  Let's see what next year will bring.

Well again it has been awhile since my last post.  I have decided that I am not going to feel guilty or make excuses for not posting sooner, the reality is life is busy.  Besides I really do this blog as a way to track my stitching for myself.  So with that being said here is what I have been up to in between all the things that happen in life:) 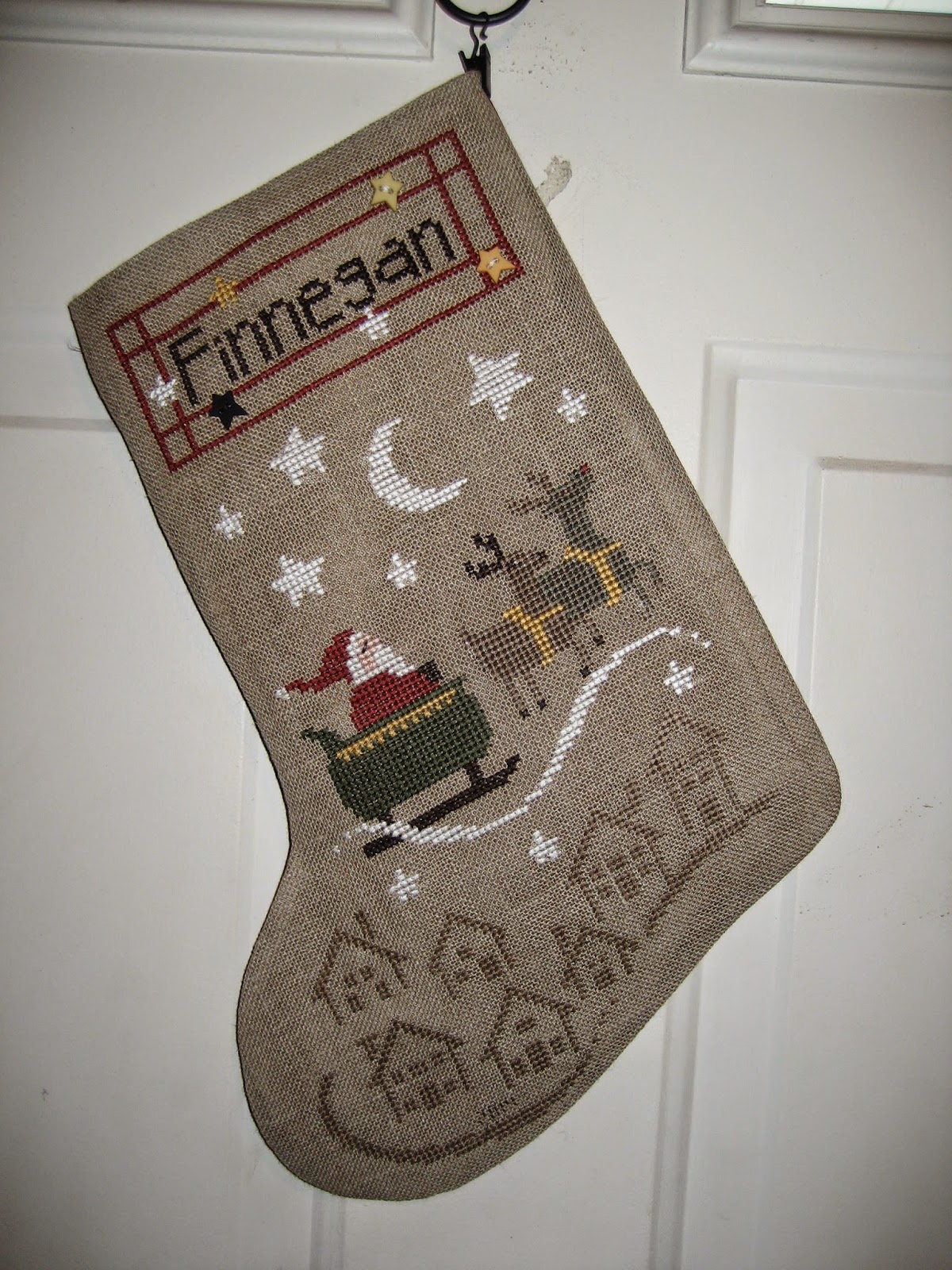 One of the things I needed to get done was this stocking for our newest grandchild.  Finnegan was born last March 5th and I have started the tradition of making Christmas stockings for each of the grandchildren.  This one makes number six.  I was very happy to have this done before Christmas.
This is a Bent Creek pattern called Christmas Eve.  Stitched on 18 count linen with DMC.
Along with the stockings I also stitch an ornament for each grandchild, plus I like to stitch one for each of my children, that is 12 twelve ornies.  I will say that I don't always get them done in a timely fashion for my children.  So far for the last 7 years I have gotten the grandchildrens done:) 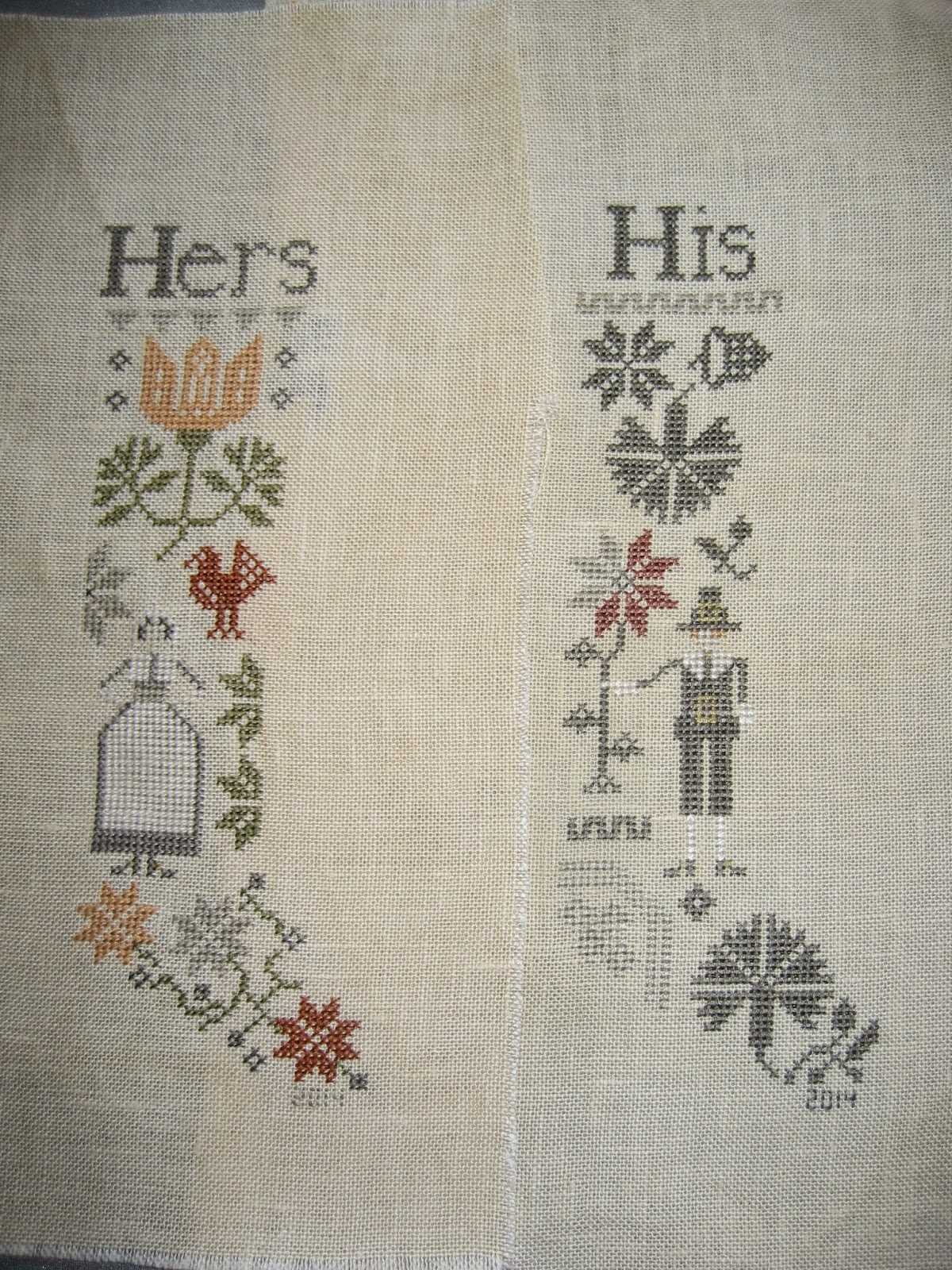 Next up are some things that I have stitched for myself but just the stitching is done.
These are Plum Street Samplers Thanksgiving stockings.  They were stitched on 36 count linen I dyed with DMC threads.
Started 11-2-2014
Finished 11-6-2014 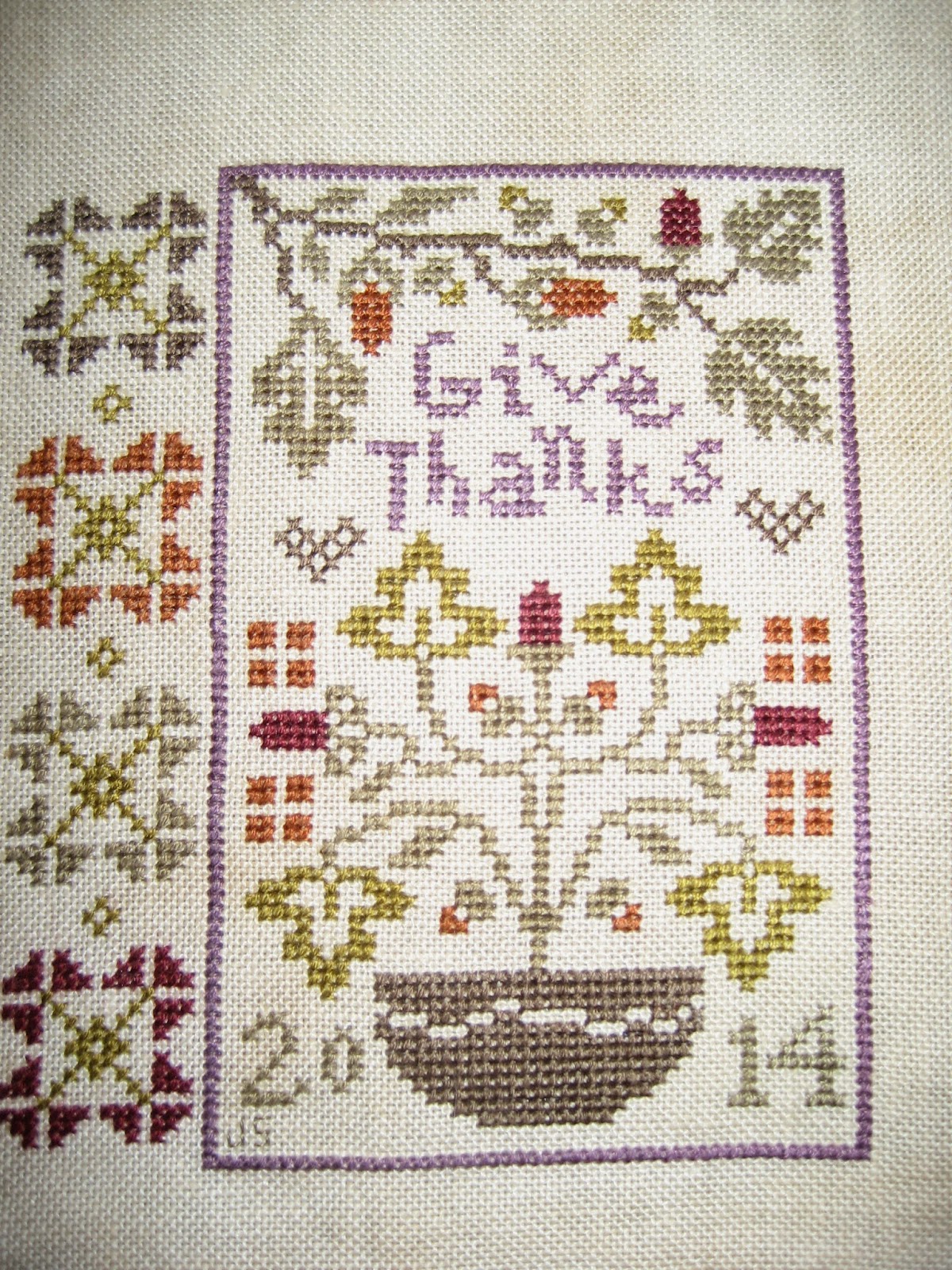 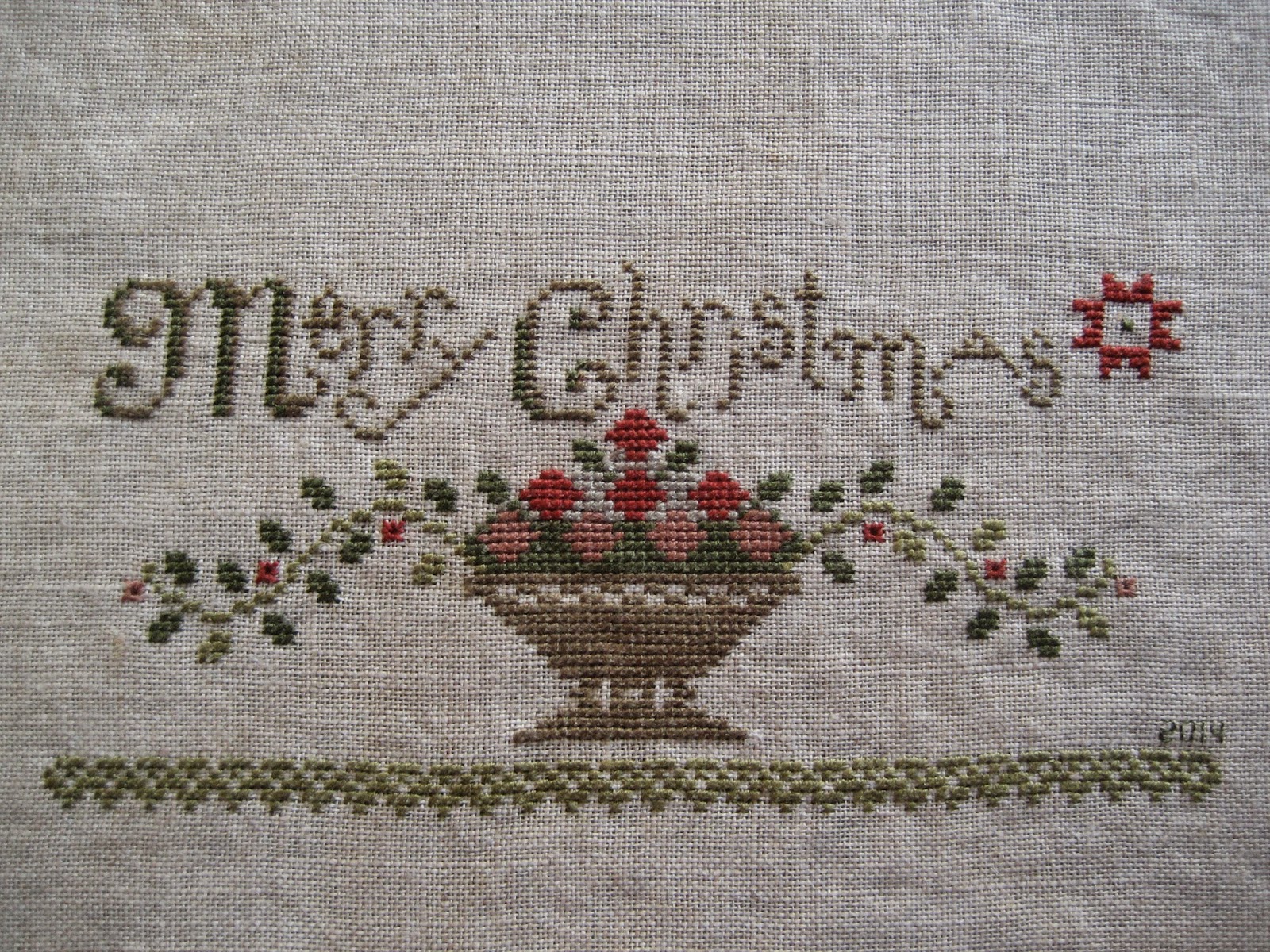 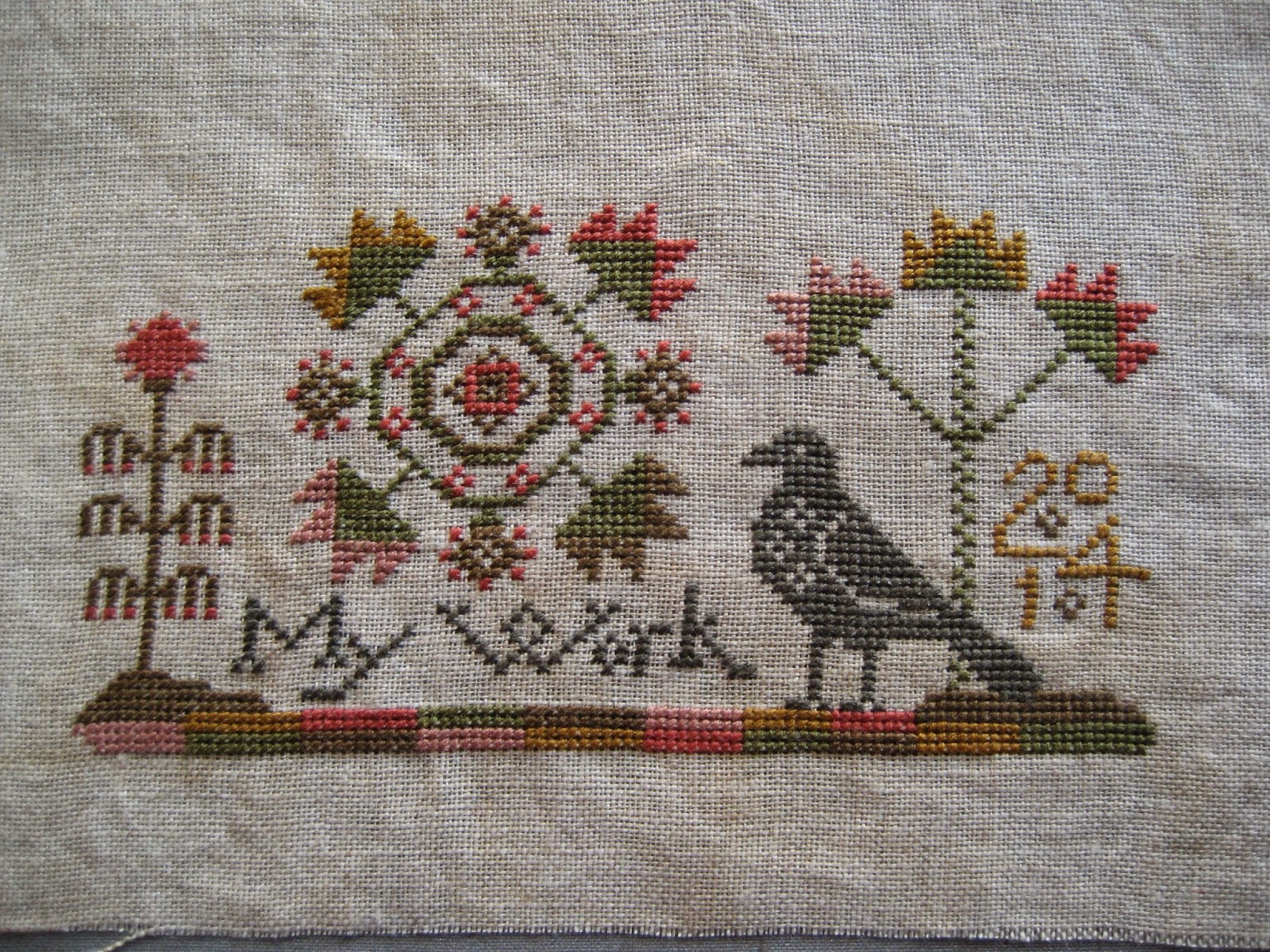 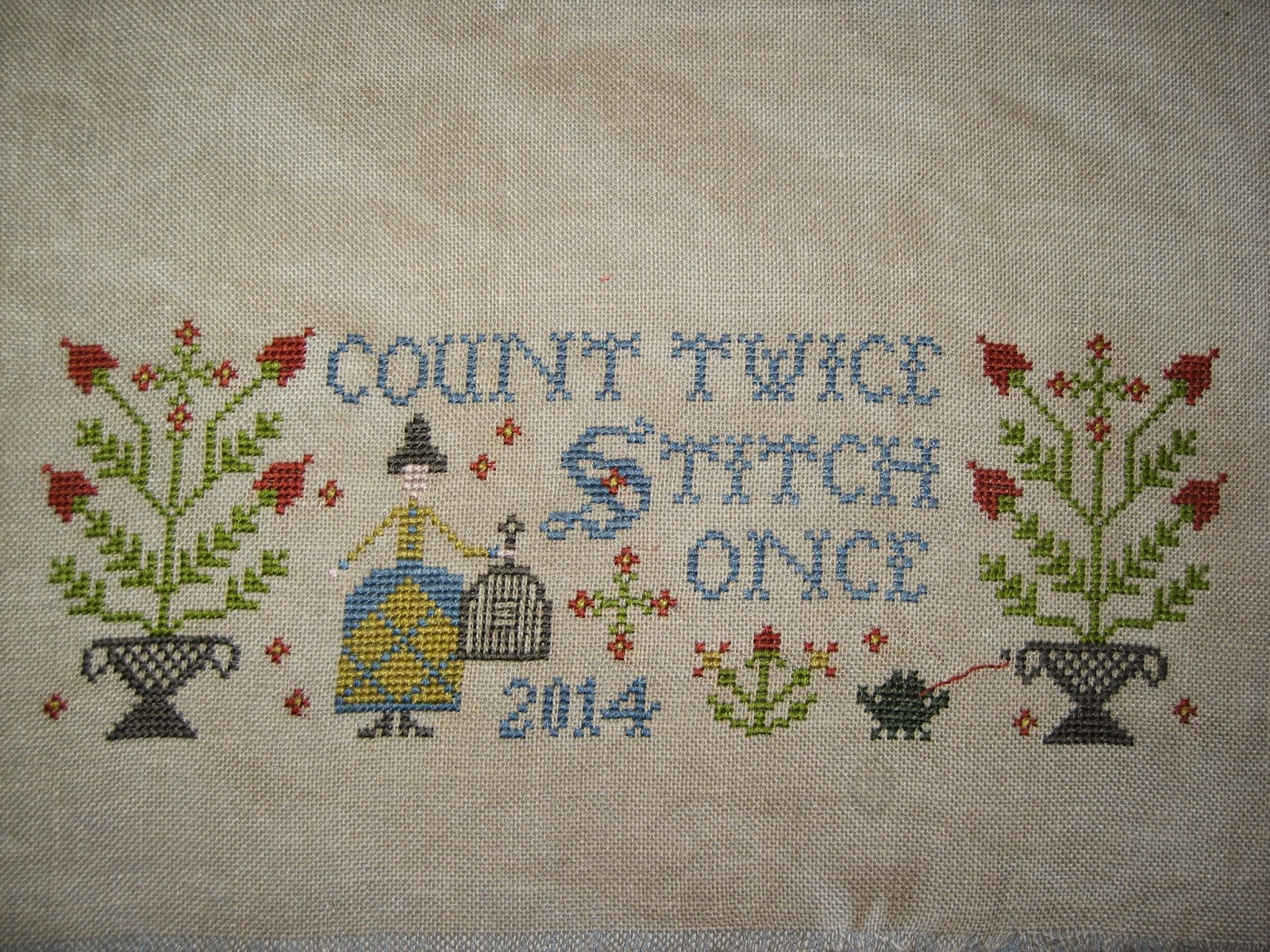 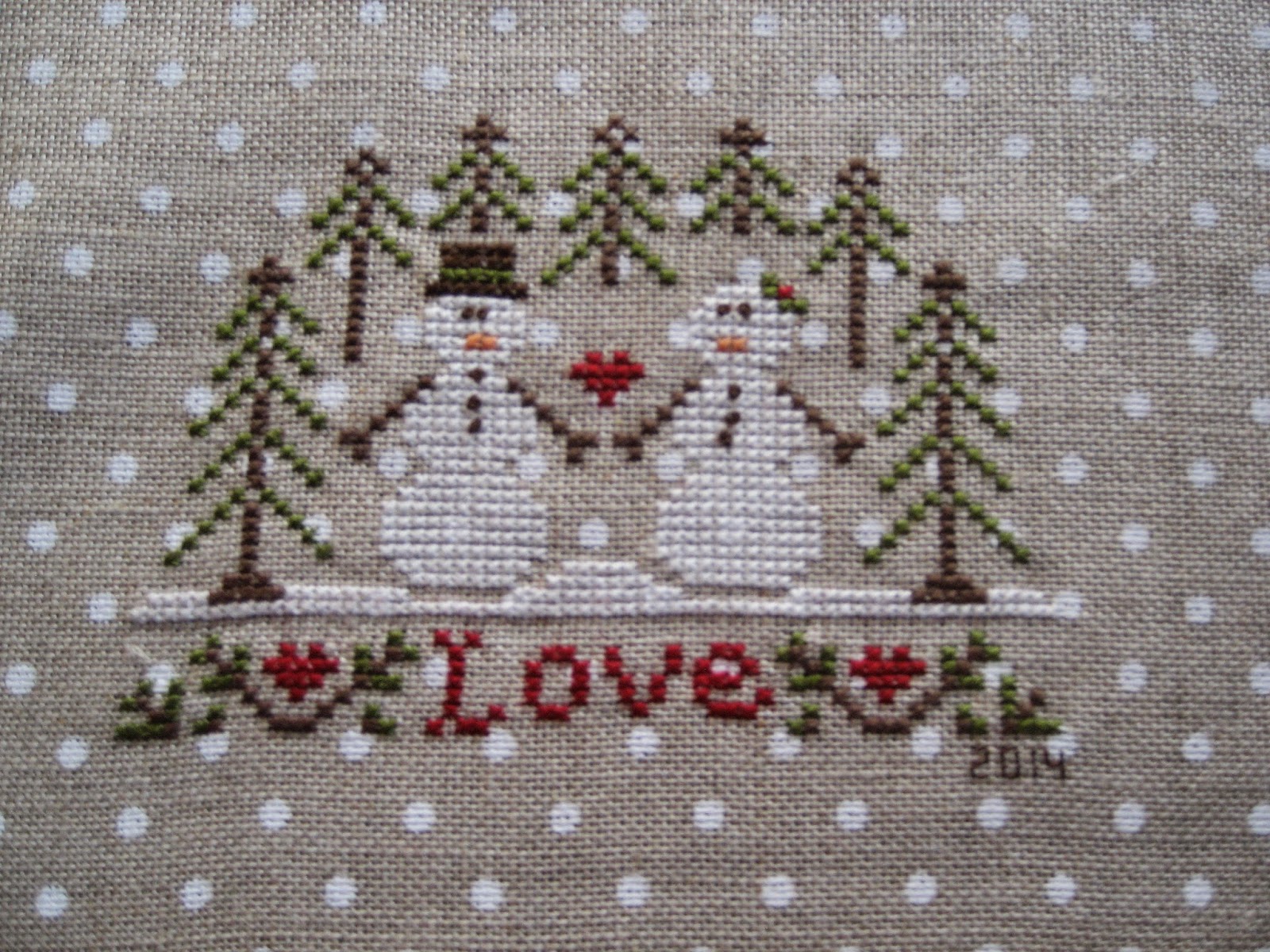 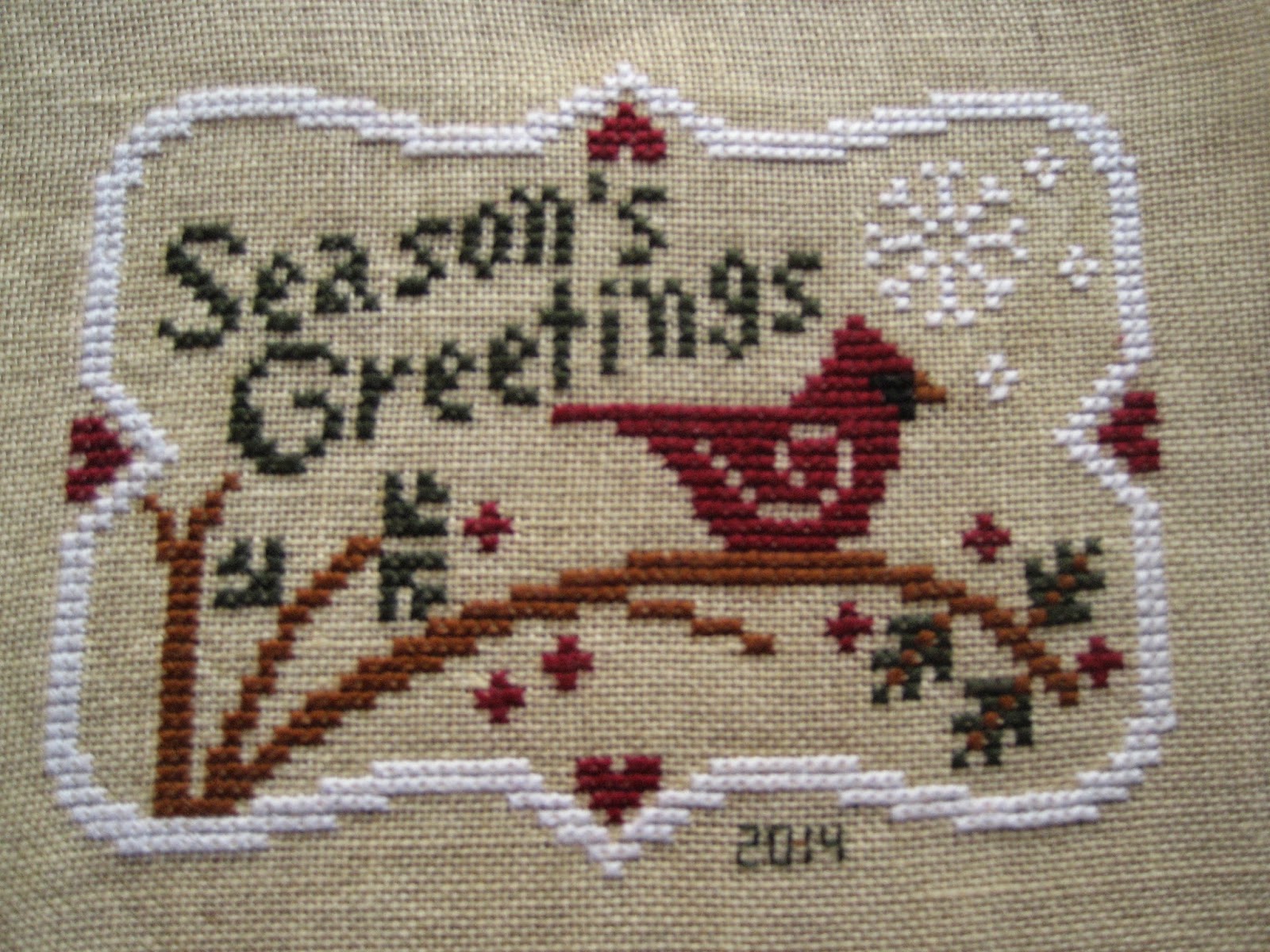 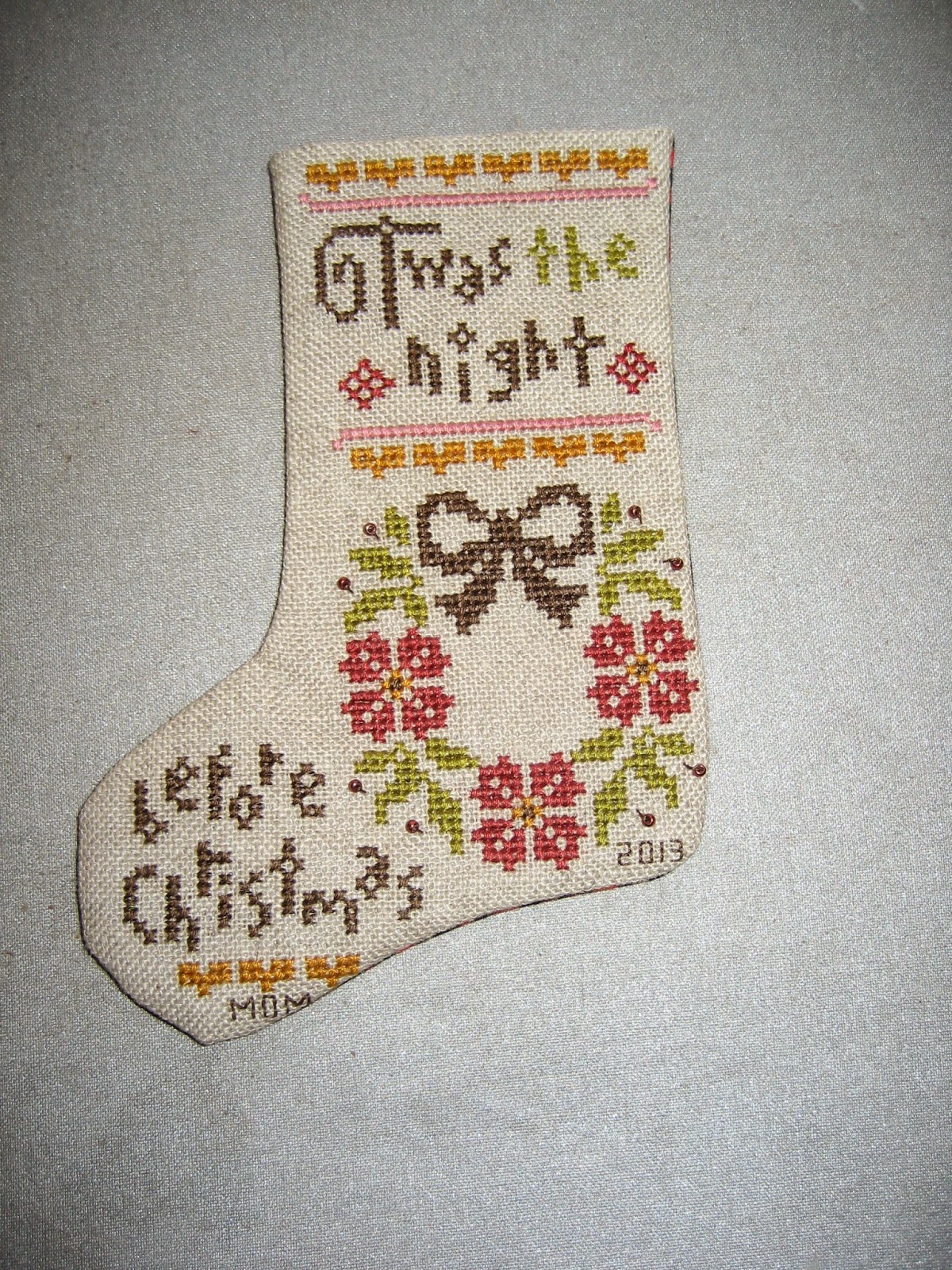 This is a Lizzie Kate Stocking that was stitched last year.  Just finished it a couple of weeks agol 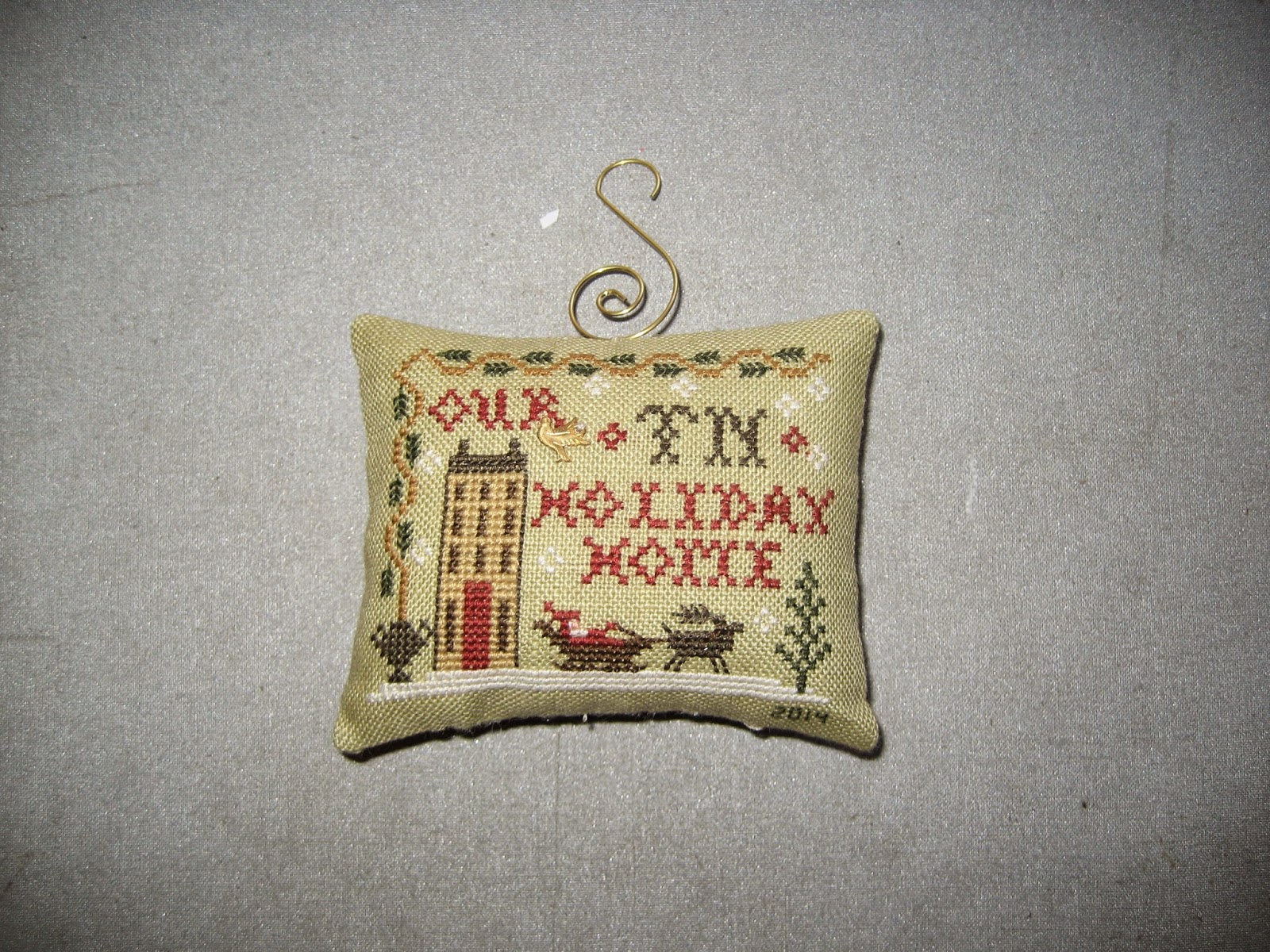 This is a Homespun Elegance ornament I stitched earlier this year for our oldest daughter as she lives in Tennessee.  I also stitched and finished one for daughter number 2 who lives in Georgia, also got it finished.  Can't remember if I got a picture of it but I did give it to her for Christmas!!


I have about five other items that I stitched, but haven't taken pictures of them. I finished stitching them between October and now.  I will have to track them down. 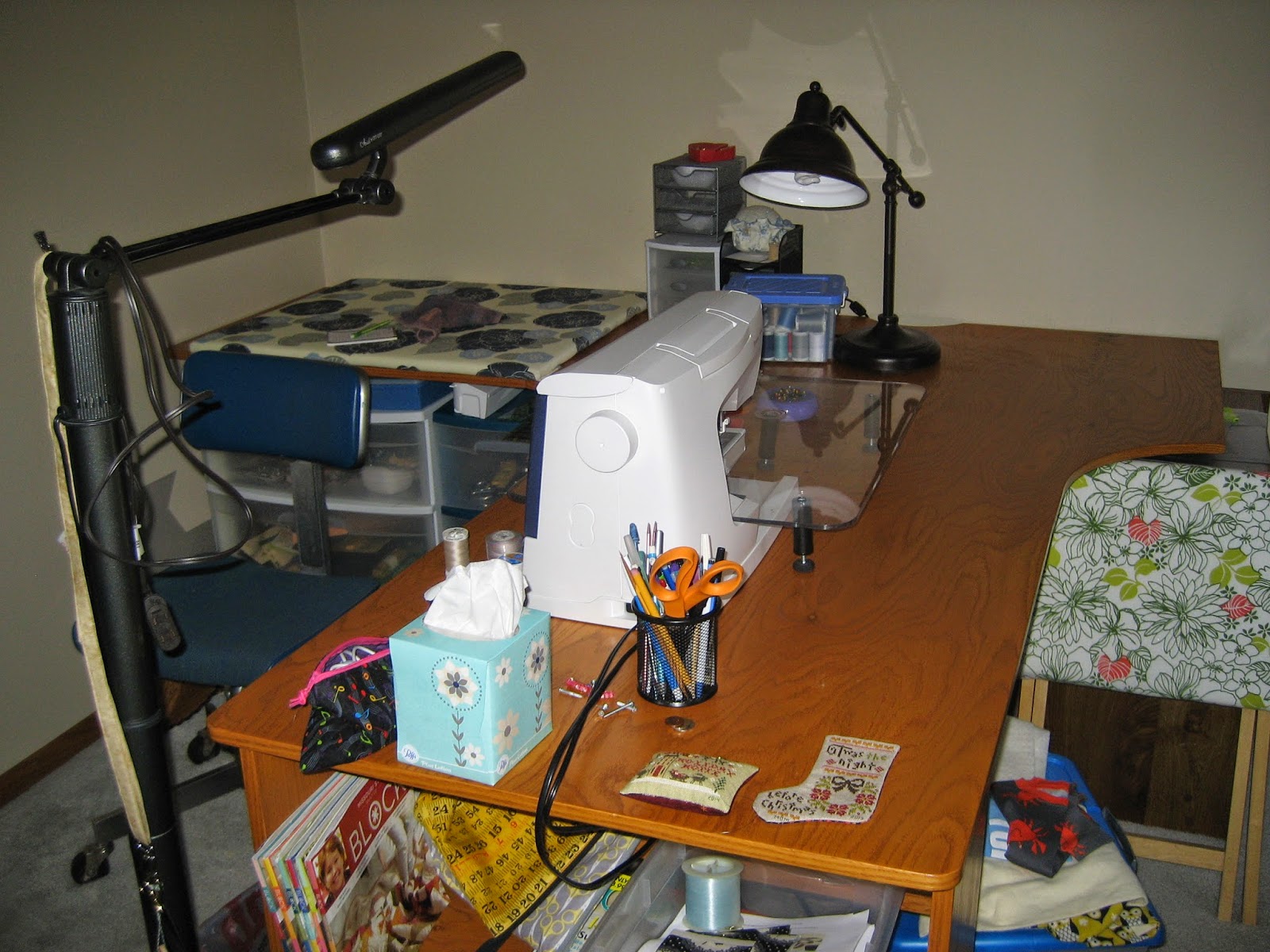 This last picture is of my new sewing space.  Our oldest son put this work station up for me.  I am so excited to use it.  Still getting things organized.  I had been sewing on the dining room table.  I am so glad to get my projects off that table.  As if I don't have enough to do as far as crafting goes I also want to quilt and sew, plus crochet and make jewerly.  Good thing I don't work!!!  But I do take care of the grandbabies alot so I don't just craft:)

Have a Happy New Year.