I have been meaning to post for at least the last week. Much has happened in the last week or two.
Here are some goodies I have gotten and a couple of things I have stitched. 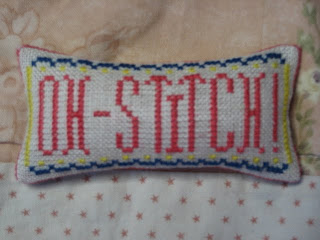 The DH had two job interviews on February 4 and 5 and so we were back home in Minnesota and while I was home I went to my LNS and found this cute little design by The Sunflower Seed and of course it is called "Oh Stitch!". I stitched it on 32 count lambswool with DMC thread. 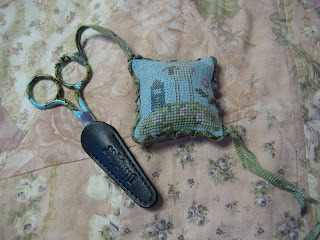 Before we left for Minnesota I stitched this Shepherd's Bush fob for the Roberta scissors. 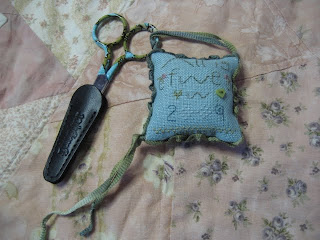 Here is the back view of the fob. I received this fob kit from Cathy B for my birthday last year.
Thank you Cathy:) I went to Joann Fabrics of course while I was home in MN, since I don't have access to a Joann's here in Aberdeen. In fact the closest one is about 2oo or so miles from here. Anyhow I found this pincushion that also holds a scissors. I thought this was the greatest thing. Had to have it!! 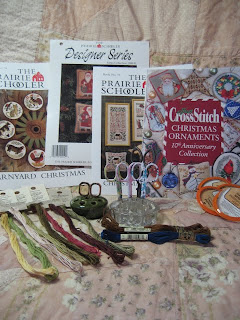 Yesterday the DH and I went to Watertown. It is about an hour and a half drive from Aberdeen. We went to just bum around a couple of antique/thrift shops and go to see what a shop called Expressions Frame shop and Knit Nook was about. The above picture shows the treasures I found. The books, thread and hoops came from the Knit Nook. I was happily surprised to find that they had quite a bit of cross stitch supplies. Not a lot of new designs, but they had a lot of the essentials, plus it is always fun to look through older books. Sometimes you find some older treasures and I did. A couple of older Prairie Schooler patterns and the 10th Anniversary JCS ornament book. Plus they had Sampler Threads and WDW. I bought the small hoops because I like to use them when doing one over one and I can't seem to find that particular kind of hoop anymore. I found two flower frogs at an antique shop and so I had to have them. The scissors in them are some scissors I have acquired in the last two weeks or so. The small gold Kelmscott Little Gems came from Linda from my last exchange, the three multi-colored ones came from one of my good stitching buds Jackie, and the bigger bronze colored one came from Yuko's scissors blog. I just don't seem to have enough scissors:)

Our trip to Watertown was also quite eventful in the fact that we were in a car accident. We are both fine, but our car was rear ended and it did not fair so well. We thankfully were able to drive it home and now this week the fun will begin with dealing with the insurance and repair shop. I just thank God that we were not hurt and neither was the person in the truck that hit us. So life goes on.
Thanks for stopping by and I hope everyone is having a wonderful VALENTINE'S DAY.